This is the third part of a short series on pairing with a super-experienced software developer to fix an open-source issue in Jekyll.

In the last post, Matt explained how he identified this particular issue for us to work on.

This series (and more series in the future) will constantly attempt to surface the tacit knowledge that experienced developers use to do their work.

Remember, the goal of this entire series is for you to do the exact same things an expert does.

To follow along, in your local environment, you’ll need to clone down the repo, and check out a commit from before our fix gets merged.

Since you’re not necessarily making your own PR, you don’t have to fork it to your own repo, you can just clone it. Here’s how to set it up:

Now you’ve got the codebase in the same place we had it in!

Open up the Contribution Guidelines and work through the video with us! The Jekyll docs talk about the various scripts we used here

Expanding on things that came up in the video: #

Running scripts per the contribution guidelines #

The Jekyll Contribution Guidelines specifies running a certain script (script/boostrap) to kick off all the tests.

This means there’s a directory of scripts (appropriately lableled script, which presumably has many scripts, but we care about only one of them. boostrap)

To execute a script, you have to prepend it with ./. This will tell your operating system that you do indeed intend on running the given script.

So, Matt runs the script with:

While it installs, Matt and I talk about a next iteration of this project that might involve work on dev.to. It’s more of an application than a library (Jekyll is a library) so it might be a bit more relevant to the day-to-day of the normal software developer.

Shipping a library for your day job is different than working on an application.

As I’ve mentioned, one of the goals of this project is to find instances where the expert uses Tacit Knowledge. I’ll use this section to bring attention to as much of Matt’s tacit knowledge as possible.

For “run tests for current file” I usually want to look at the test file before running it, so my workflow is:

This file we’re looking at is 350+ lines long. Scrolling up and down is a waste of time.

Here’s what he does:

This isn’t just fast, but allows him to not waste thought trying to find bits of code, or scroll around. He doesn’t care where in the file a constant or method is defined, just wants to look at it.

Please add this general process to your own workflow, if it’s not already there.

Note - When you’re staying inside the editor, at least for Atom, I can double-click any text, and when I hit ⌘+f Atom inserts the selected string in the search box. This saves me a copy/paste.

i18n, a16z, a11y are all phrases you might have come accros in the industry.

The Jekyll team has confidence in the build setup, so we run the tests to make sure we’re starting in a clean state.

Add screenshots here, mention being able to see lots of test output at the same time

Usually I split my panes vertically…

Here’s why. Look at the line counts: 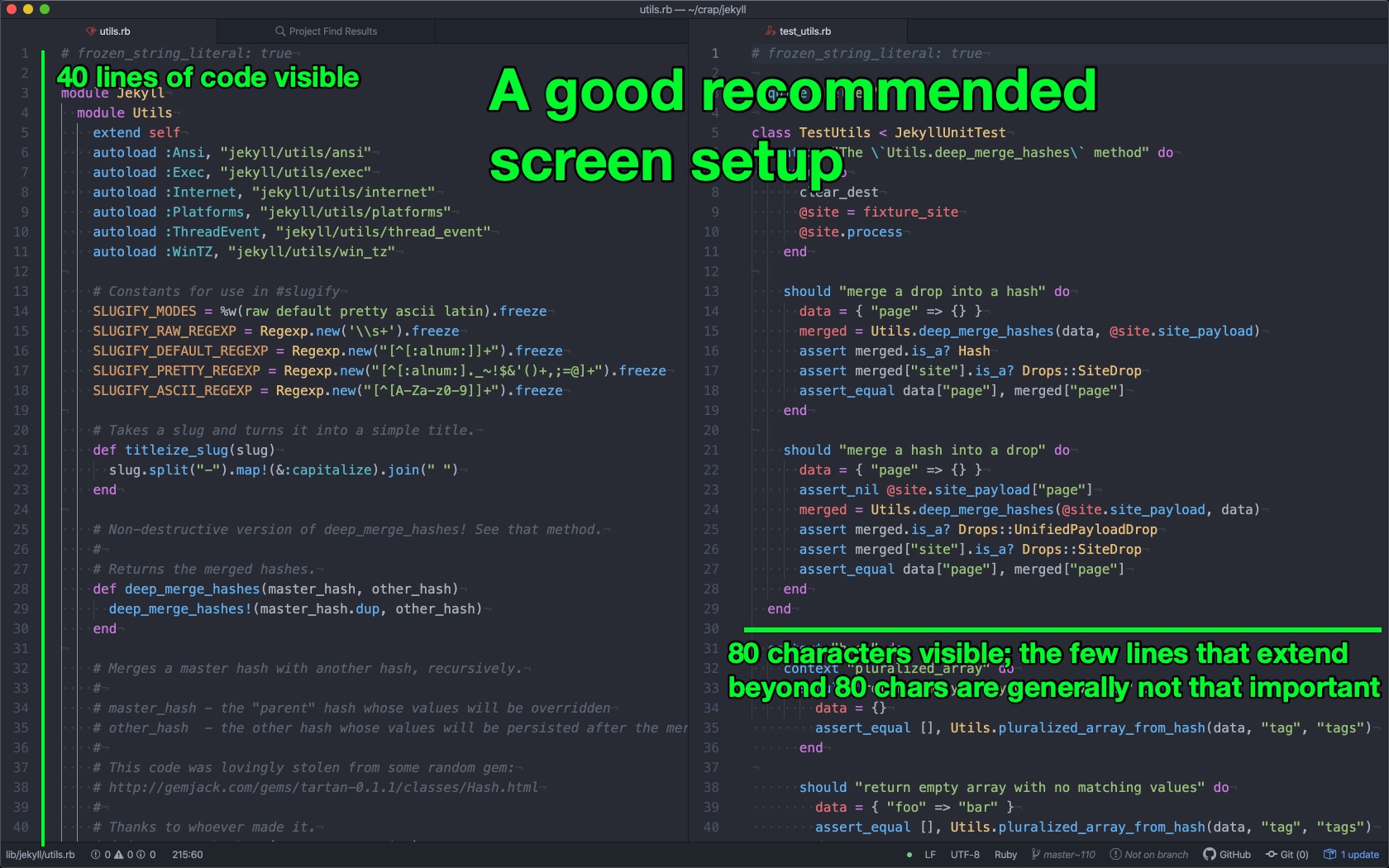 With the keyboard shortcut of ⌘+\, you can toggle the visibility of the sidebar effortlessly. 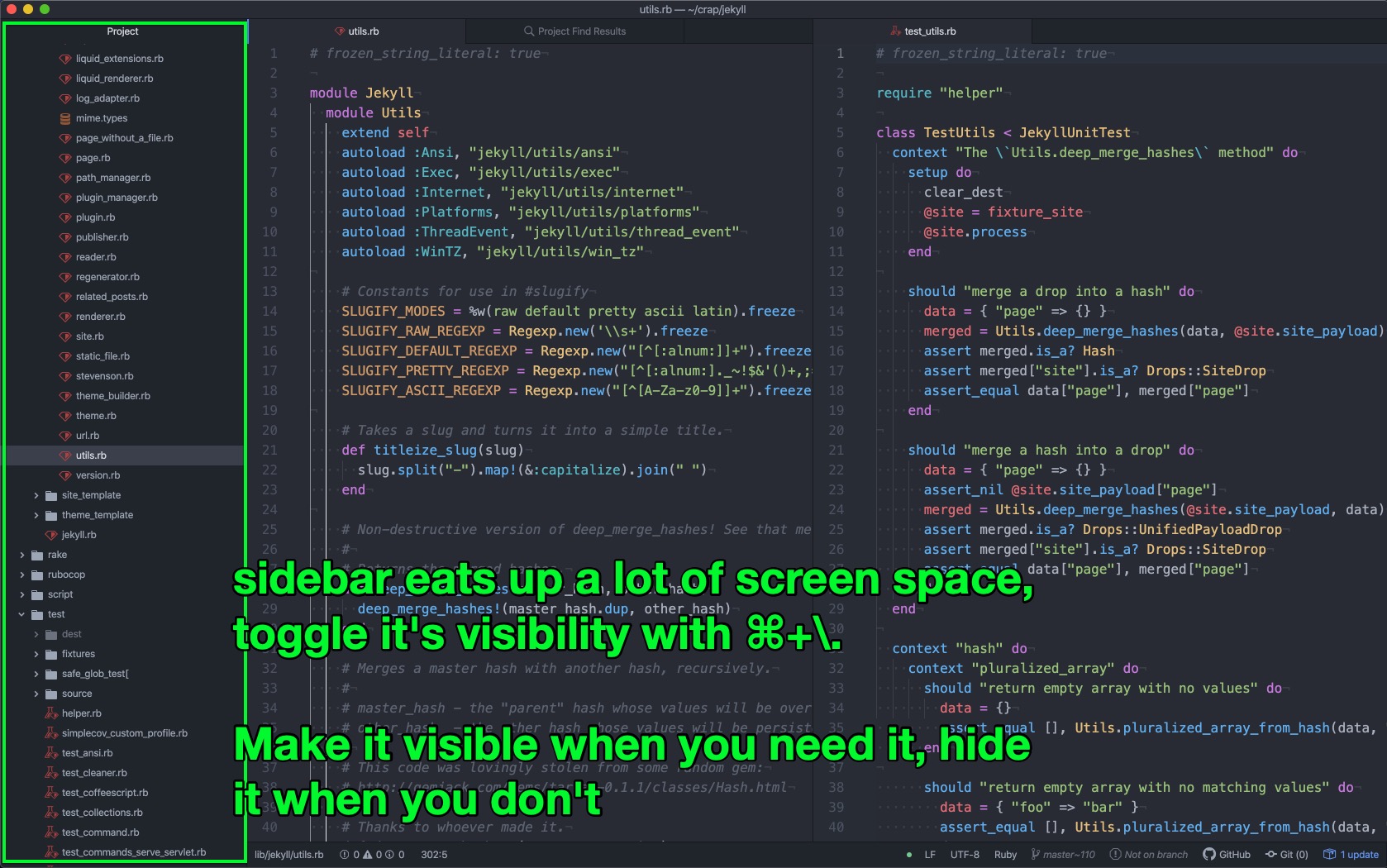 If instead we split the screens horizontally, here’s what we’d get: 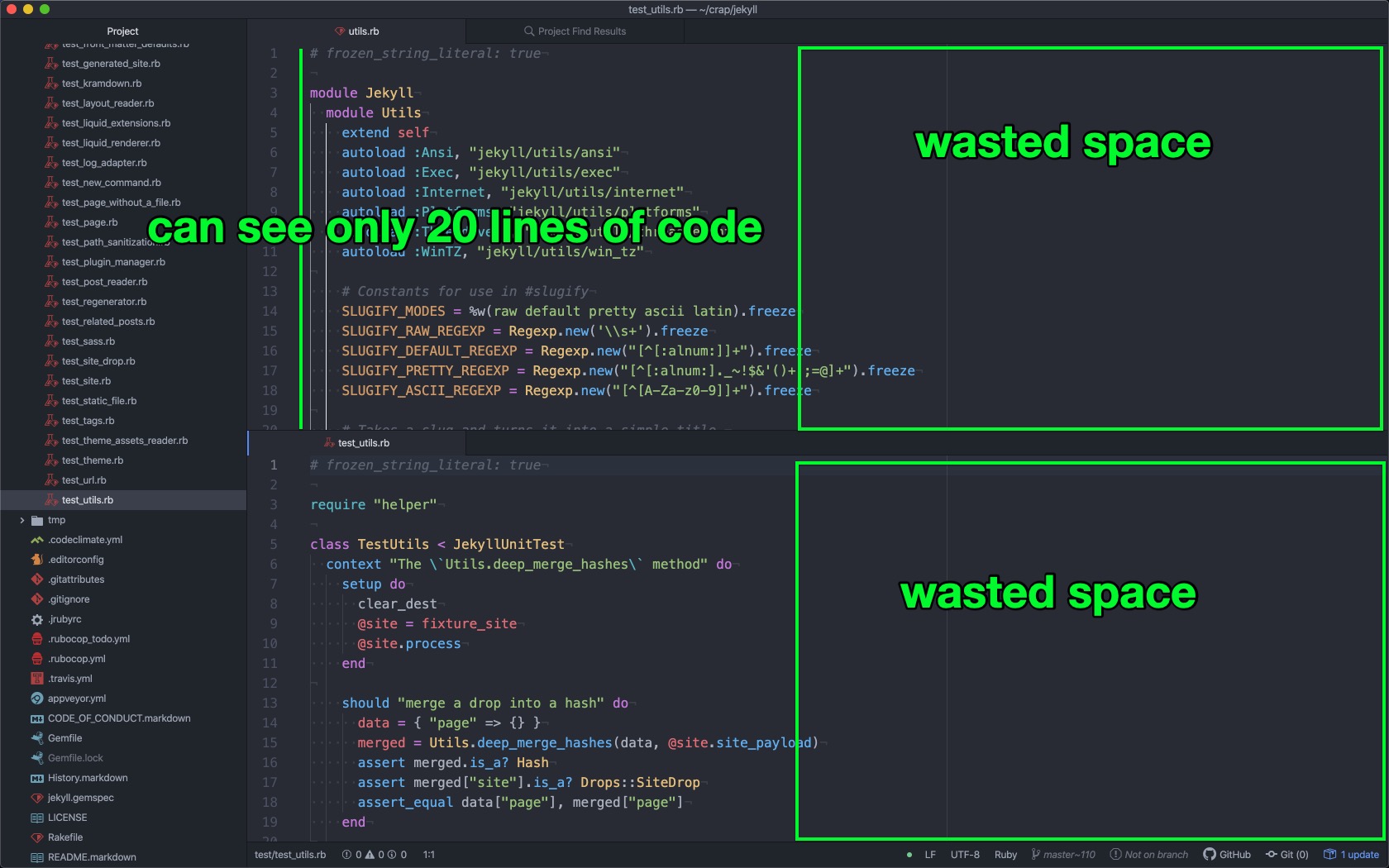 Matt splits the panes horizontally, since he’s running his fonts unsually large so they come through better in the recording.

How Matt decided which file to add the failing test to #

Searching for slugify vs. .slugify

Ah, the file name convention is different from what I expected.

Try this yourself, in your editor of choice. Do you see the difference in results?

Matt has keyboard shortcuts set up for his commonly used applications.

I noticed that I don’t think he used alt-tab once.

I’ve got keyboard shortcuts set up for Atom, Firefox, iTerm, and a few other tools. I hardly ever use alt+tab on my laptop, and it feels like this saves time and effort.

I’m all for copying what experts do, might be worth setting something similar up on your own machine.

At about an hour in, we’ve written three lines of code:

But before you go, why not subscribe to get updates when more guides in this series are done, as well as when future guides go up?