Anything I write ranges from “super rough notes-as-i-go, don’t even expect full sentences” to “this post is done and proven to deliver what it promises to deliver”

I’m working through Leveling Up Skill #6: Commit Tracing, as applied to the pry gem.

Iuliu Pop and I are working to maximize learning, targeting “top 10% software developer”, perhaps scoped down to things like a specific programming language, business domain, etc.

The question we both think about are “what are the specific and tactical tools one can apply to improving one’s skills?”

What And Why To Trace Commits #

Why To examine the Pry Gem #

Pry is a ubiquitous tool in the Ruby/Rails community, seemed like a good place to start.

Open the gem in your editor:

Hm. I check to see that the gem is installed locally:

Ah, of course, we’re calling “bundle open”, so it wants to look at our Gemfile or Gemfile.lock

So, I’m cding into a directory that has a Gemfile and Gemfile.lock containing pry. 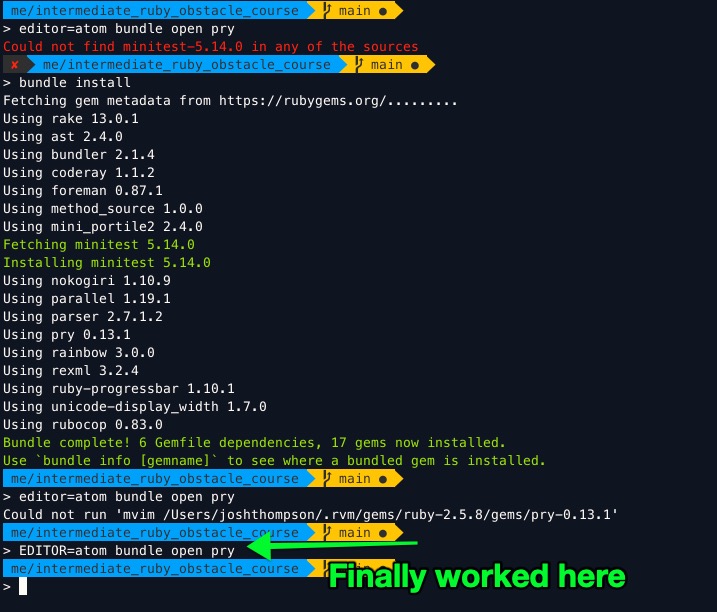 Arg. Not success, duh. As soon as I spent 3 seconds thinking about it, I realized that of course the code included in the Gemfiles doesn’t include version control info. We’ll need to change tacts, clone down the actual pry gem (with the .git folder included) and try again.

1. Create a place for the Pry source code #

Make a new directory, clone down the pry gem

Now we can work through this together!

Chelsea Troy says she looks for:

A fairly complex code base that exemplifies my topic of study and has clearly named, well-circumscribed commits.

I’m skimming through a handful, I’m going to find 5 “promising” commits before moving to step 3. (I expect that my first few attempts at commit tracing will not be precisely the right size/complexity, so I’m not getting held up on this step)

Here’s some interesting commits that I might use for the next step:

I decided to start with Add Pry::Warning

First, I’m going to check out the repo to right before the commit that adds Pry::Warning

Here’s how to find that commit:

Next, use git diff <sha-of-the-next-commit> to see the contents of this pull request, represented inside of your editor:

Here’s how I grabbed the commit sha:

This isn’t exactly what I want - I want to see the code as what’s added, not what’s deleted.

Alternatively, I’ll check out the commit that adds the feature:

And now I’ll diff this feature commit against the prior commit, which we could either hardcode the commit to diff, or use a shortcut.

Run both of these in your editor:

Whatever method you use, here’s what you’ll see:

Write Out All Added Code, Including what file it’s in #

Now I’m going to copy this code down on paper. I’ll time how long this takes me: It’s Time.now when I start.

OK! Finished. It took 9 minutes for me to write out that commit, by hand, on paper:

Open the affected files in my editor: #

(I could have done atom . and used the fuzzy finder to open these individual files up in sequence, but that would have taken longer)

I’m going to run the tests for just the affected spec. In atom, shift-ctrl-c copies the relative path for the selected pane to my clipboard, and I can paste that in my terminal, and do rspec ctrl-v, or rspec spec/env_spec.rb

josh, that seems like a lot of work for just running a single test file

Yeah, when I skip around a project, running many different test files, especially deeply-tested test files, I use the shift-ctrl-c thing all the dang time.

Now lets reset the repo to the prior commit, and manually rebuild this commit, from paper.

Reset repo to prior commit #

Boom. Here’s what I just did:

Running just the specs, without the actual code to make it run…

When I add require pry/env and:

The tests all pass.

Siiiiiiiiigh this is annoying. The tests shouldn’t pass. Why are they passing???

Time to dig into RSPEC a bit.

First, what’s this specify thing? Hashrocket with the explanation:

I wanted to be able to put a pry in that line of code and be able to call key, or described_class[key] or Pry::Env[key].

I’ll have to “deconstruct” the specify block to get a pry closer to this line of code.

We’ll go from this:

But I do have it now, after refactoring from specify {} to it/do:

A little digression on ENV, test 1: when ENV contains the passed key #

Time to learn a little about your env, if you’ve not already. In Pry (or your terminal session), type ENV (it’s case sensitive)

You’ll get a bunch of results back. When I run ENV.count I get 87 results. I’ve had to search through my ENV before to find matching results, and I use a little ruby method like so:

This selects all my ENV entries that have the string pry in them, in a case-insensitive way. (that’s what the trailing i specifies.)

I can see that as the code executes, the first spec should pass. It sets ENV['PRYTESTKEY'] to val, and then asserts that… well, that it did this. Cool. On to test 2.

By the way, when running the tests like so:

You can add :line-number to the end, and it’ll run the spec associated with the should block in that line of code. I do this to run tests one-at-a-time:

So, we’re testing ENV behavior when there’s no assigned key.

Instead of ENV['PRYTESTKEY'] = 'val' having been run, now we’re just calling a bare, non-assigned env variable, like ENV['totallyfake']

What happens when you call a hash key that doesn’t exist? You usually get nil, so this test also doesn’t really tell us new things:

So this also passes.

Test 3: when ENV contains the passed key but its value is nil #

I converted the specify to a it/do block, added the pry, and am visually/manually reproducing the assertion:

Arg. I feel disconent messing with code when the tests don’t even fail.

AAAAAAH it’s because I created the new file in the wrong directory. Once I move env.rb to the lib/pry directory (or something like that) the tests are failing. Huzzah.

OK, I deleted the lib code, rebuilt it using the tests. No problem, ended up with a close copy to what was in the PR. It didn’t take very long. Enjoyed it.

Now to rebuild the whole thing, including the tests.

I ran git reset --hard 17bdfd70, to check out the whole repo to right before this feature that I want to add.

I added a “shell” of the test file to spec/env_spec.rb, like so:

and when I was running it, I kept getting uninitialized constant RSpec errors. No idea why - I matched what exists in other files, so I did a bundle exec rspec spec/env_spec.rb, got the same error. bundle installed, re-ran it, and all worked. no idea why.

Now I’m getting uninitalized constant 'Pry::Env', which is reasonable, because… well, I’ve not added the constant.

and the test passes. Upgraded the test to include the 2nd assertion:

And now the ENV value is persisting between test runs, so I need to clean it up.

In the describe I added:

Now all the tests pass again. So far so good. The last test case is where the real work happens, I think.

Here’s the last test I added:

and the test output:

how to open gem in specific editor #

How to find file to open to look at tests and code and such? #